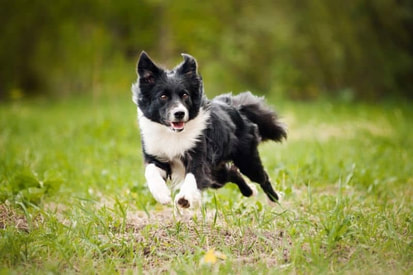 Stamina is the strength and energy that allows your dog to sustain physical and/or mental effort for long periods of time. Increasing your dog’s stamina reduces fatigue and exhaustion and therefore helps prevent injuries. That’s important to all of us, whether we have a competition dog or a family dog.
​
Stamina is often confused with endurance, but they are quite different. The easiest way to think of it is that stamina defines your dog’s physical and mental ability to perform any kind of exercise again and again throughout the day. For example, your dog has great stamina if it can run at the same yards per second on the 6th agility run or the 20th flyball run of the day as it did on the first. Your dog has great stamina if it can hike with you all day, covering 5 times more ground than you and not be dragging its feet at the end. You can think of stamina as the opposite of fatigue.

In contrast, endurance is the cardiopulmonary ability to perform a continuous motion over a long period of time. Mushing dogs that run upwards of 100 miles a day in a race and dogs that accompany their people on a several-mile run have good endurance. Endurance activities usually involve a more moderate speed than strength activities but are sustained over a relatively long period of time. Of course, for a dog to run an endurance race of 100 miles, it must also have stamina.

Strength and Endurance are Activity-Related
Strength Activities:
Although some dog activities require a combination of strength and endurance, most tend to be predominantly one or the other. Strength is most important for dogs that compete in agility, flyball, FastCAT, obedience, rally, nosework, barn hunt, coursing, dock-diving, hunt tests, and most other dog sports. If your dog participates in several runs a day, it also requires stamina. Stamina is also important for dogs that accompany their people on hikes or just spend an active day with the family. These activities all require strength – that is the ability to move the body at fast speeds for short distances, including running in short bursts, jumping, turning, chasing squirrels, etc. To safely participate in strength activities repeatedly throughout the day, a dog needs stamina.

Here is a human sports-related comparison of strength and endurance. Think about runners who compete in the 100-m dash vs. marathon runners (Figure 1). Usain Bolt has been clocked at an astounding 28 mph. That requires tremendous strength, and one look at the muscularity of his body confirms that. In contrast, competitive marathoners like Dennis Kimetto run at about 10 mph, but over a much more sustained period of time. That requires endurance. If Usain Bolt were to run multiple heats in a single day, he would require both strength and stamina. Because Dennis Kimetto runs for over 2 hours at a time, he requires both endurance and stamina. 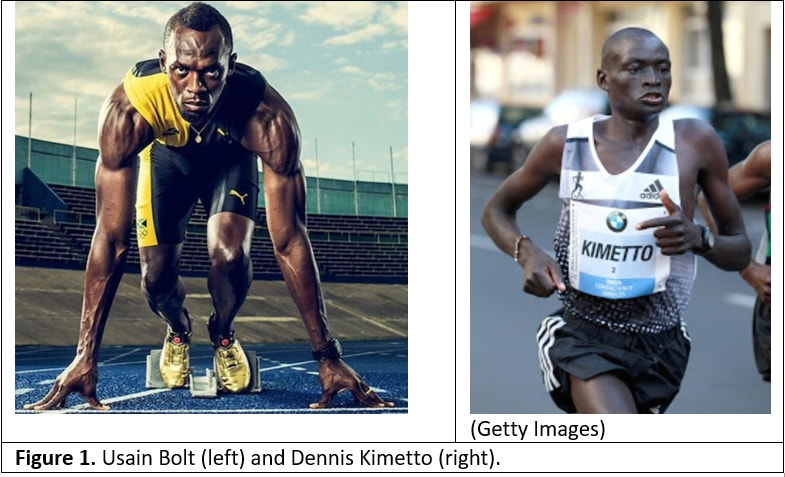 1. Your dog’s weakening muscles allow greater-than-normal flexion and extension of the joints. This can lead to strains (stretch injury to the muscle and/or tendon) and/or sprains (stretch injury to ligaments).
2. Your dog is not able to be as careful about foot placement and might also not have the strength to correct an error, like a foot that slips off the side of the agility dogwalk or off the edge of a cliff as your dog runs along a trail. These kinds of errors can also increase the risk of injury.

How to Boost Your Dog’s Stamina
The best way to boost your dog’s stamina is to simply modify your dog’s existing fitness exercises. Hopefully you are giving your dog some additional, planned exercise other than just going for walks. For more information on why walking might not be the best exercise for improving your dog’s strength, check this out.

Strength exercises might include The Wave – having your dog wave with its paw lifted higher than its head for 30 seconds – a great way to strengthen the front leg muscles. An exercise that strengthens the core and rear leg muscles is Front Feet Perched – having your dog place its front paws on an upside-down food bowl and circling to the right and left – maybe even stepping over bars or a ladder on the ground next to the bowl. For examples of great fitness exercises that target the front legs, core or rear legs check out these videos.

The best strength exercises are those that gradually work your dog to overload. For more details on the concept of overload, go here. When your dog approaches overload when doing a fitness exercise, depending on the exact motions that the exercise involves, you will begin to notice that your dog starts to “cheat” a bit, either by changing its body position, moving away, fidgeting, or stopping entirely. This is a sign that your dog’s muscles are starting to fatigue, and that is a good time to stop the exercise. Record what you were doing when overload occurred (how many seconds or reps, depending on the exercise), so that next time you work on the exercise, you can start a little bit before that point and try to work past that point. In addition, keeping records will help you determine whether your dog is gaining strength. This is important, because if your dog isn’t progressing, it’s possible that your dog has an injury.

To boost your dog’s stamina, work an exercise to overload 3 to 4 times in a session, taking a 90-second break after each time your dog reaches overload. Another way is to work the exercise to overload several times a day. You can alternate between these two methods or do both in a single day. It’s as simple as that!

By making this modification to build stamina, you will greatly reduce the risk of injury when your dog is training, competing or just being a happy dog playing with you or other dogs. It’s a win-win for both you and your dog!