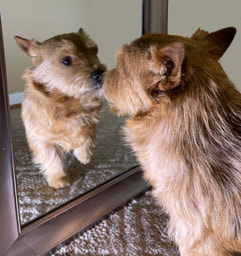 Who is That Dog in the Mirror?

Does your dog think about itself?

How we perceive ourselves, or our self-image, greatly influences how we think, feel, and relate to the rest of the world. You recognize, for example, that you have a physical body, and you might describe yourself as tall, short, athletic or clumsy. You also know that you have a social self – one that interacts with different individuals and groups in different ways, depending on the situation.

The concept of “self” was frequently thought to be limited to humans and just a few other species, but not dogs. No longer! Recent studies have demonstrated what those of us who share our lives with these incredible creatures have known innately all along – dogs also have a sense of self. Here’s how the studies were done, and what it means to your relationship with your canine companions.

The Mirror Mark Test
This test, first published in the 70’s, was thought by many to be the definitive test for determining whether an animal had the most basic of self-concepts – the ability to recognize that it has a body (1). The test is quite simple – place an animal in front of a mirror and watch how it behaves. Once the animal is used to the mirror, put a mark on part of its body that cannot be viewed without the aid of the mirror, such as under its chin. Now observe whether the animal is curious about the mark and whether it recognizes that the mark is not part of itself by scratching at it, for example.

We’ve all seen what dogs do in front of mirrors. They bark at the dog, they might go up and sniff at the dog’s reflection, but they don’t seem to recognize the dog as themselves. In fact, the ability to recognize “self” takes time to develop – humans don’t pass this test until they are about 2 years old.

Over time, however, some scientists have felt that this test wasn’t a sufficient demonstration of the concept of “self,” because it depended solely on the animal’s vision. What if some animals used other senses, such as scent or touch to recognize “self?” For example, in one study dogs investigated their own odors longer than those of other dogs in a type of “olfactory mirror” test (2).

The ‘Body As An Obstacle’ Test
In this test, toddlers that are sitting on a blanket are asked to pick up the blanket and give it to someone. As with the mirror test, until they are about 2 years of age, toddlers don’t realize that they have to actually get off the blanket to hand it over, suggesting that they have no concept of themselves as a physical being (3).

In the present study, this test was adapted to dogs. 32 dogs of different breeds and sizes were asked to pick up a ball that was attached to a mat on which they were standing and give it to their person (Figure). These results were compared to what happened when the ball was unattached to anything or when it was attached to the ground. Dogs consistently realized that they had to get off the mat to be able to pick up the ball, indicating that they had a concept of their own bodies as an impediment to the task.

The Body As An Obstacle experiment. Dogs figured out that they had to move off the mat to be able to hand the ball to their person, because the ball was attached to the mat.

What Does This Mean?
When I first read this study, my reaction was, “So what?” and maybe you feel the same way.  I had to delve a lot deeper to understand what it means to have a concept of “self.”

Without a concept of “self,” animals are believed to lack a concept of how others feel and how interact with them based on those feelings. This new study adds to the evidence, and frankly to what we have innately known all along, that our canine companions do have complex cognitive abilities and emotions such as empathy, trust, an ability to understand others’ emotions, and yes, even to love.

Maybe this is why your dog puts its head on your lap and looks into your eyes when you feel discouraged. Perhaps this explains why a normally hyperactive Yorkie lies still on the bed beside a cancer patient. It might even explain why your dog trots into a room full of guests carrying your underwear! It certainly does reveal that we have only scratched the surface in our understanding of our dogs’ capacity for emotions.